Browsing folksy websites (sounds like a Cocteau Twins song), I was moved to commit this week’s Creatively Different Wednesday to the business of pendant making. Like babies and ASMR devotees, I am dribbling-lulled by ‘how to’ videos on You Tube; thence sleepwalking into Hobbycraft with the back-up pretence of buying a frame, where I blow a spectacular £14 on the circles, ovals, cabochons and glue – starter-kit for my new project: aware there are prices much lower online, but for kick-off I so need to handle these things – plus, I like the staff in Hobbycraft; they’re nicely attuned to their audience, and their ‘have a good day’s always sound so… meant. And then later to the next town down, with its pinball-machine-like riot of charity shops – counter-culturally not such a symbol of rental gloom; last year this town was awarded Britain’s Best High Street. There to buy the new old material for the cut-outs to make up my jewels.

I need backgrounds, bases, stages for the briefest cut-out poems. It’s a pleasure to thumb through bookshelves knowing what I’m looking for, and quickly I’ve amassed a bounty of the etched and rococo (actually a Cocteau Twins song) and washed-out blue-greens of early offset printing. And another dated map of Wales. £4.25 in total, but this includes a book I’ll send on elsewhere, and a really fab find in The Dairy Book of Household Management (1980), general editor one Neil Tennant – yes, later of Pet Shop Boys – which I figure (providing I leave it intact) will be worth billions at some point, and its pictures of orange kitchens are superb.

I am pretty rubbish with glue. And worse still at waiting, or following tips; and when my scissors drift off course I’m more inclined to observe that than to stop. None of which madness troubles me much anymore. After a mere half-hour the bench I’m working at resembles the inside of the motorhome in Breaking Bad. I laugh and I hunker back down. These are my cut-out moments; reunions with the act of making those poems: and though I know the needs are different here, the soft-eyed hunt for the words is the beautiful same, as are the texts where the chase takes place, and I feel as connected as I ever did. 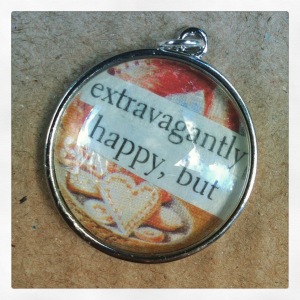 My first understanding of my new limited space. Words battle over prettily selected screens and I have to relinquish something; but the mooning lens fixed over the top somehow rescues the perilous edges, and the piece is a not-so-bad beginning. Until, that is, the glue; applied too freely and brushed about too slowly, means in a certain light there won’t be any great ‘drying clear’ to boast of. The window to my left is not my friend, and through pound-shop magnifying spectacles I’m at a loss exactly what I’m looking at. Already, it’s too much fun. 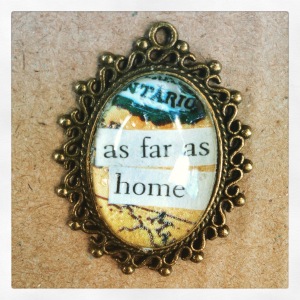 Oval. Fancy. Bronze. I have a book of the sea and there are maps in amber and navy; place-name lettering in something like an inky hand. The trick is getting places in the frame; which hour of trying results in defeat – New Hampshire down to Connecticut and Massachusetts; New York curving to New Jersey, will not stand, and so eventually Lake Ontario heads up the top, with a lower M of Maryland near-lost beneath a glue bubble colony: not uneffective, but how to know this will happen?

Birds appear in the books I have bought; birds coaxed from filigree’d cages. Words again smother them: I may have to consider finding smaller point type, but remind myself this is all an experiment. Something happens with the glue and the print on the pages of this book – sky-blue blooms spread at the edges, and a therefore faster fixing of the cabochon creates more inky school-bag Quinkiness; which effect I don’t mind at all.

At last I am making more mistakes; lazy cuttings and ill-fitting text and the time is against me. So I just go for anything – something new. Old sketches, doodles, even a rummage through discarded Post-Its – and then reach for a well-dated collection of notes nearby. A studiously spiral-bound gathering of things I used to write: an audacious pitch to an early Film4; a record of madly hitchhiking; character studies, and clippings from Viz. I cut out the date-stamping and the glue on top I squish uncaringly so it would bubble… anyhow. Crystaling and lacing happen acid-like and icy. And I think the piece as it works overall, and how it comes about, makes this my favourite one of these first four.

Well, now I’ve ordered more – and slightly larger – trays and cabochons, to come by next Wednesday; and I’ve found some better stuff online about applying glue. Which I shall no doubt ignore. So… let’s cook.

I come from a long line of cartoons and beer. I was once peed on by a tiger. Hoping the resultant super-powers are yet to come, cos if these are they, then, grrrr....
View all posts by Stevie Mitchell →
This entry was posted in craft, Poetry and tagged Cocteau Twins, collage, crafternoon, creativity, glass, jewellery, pendant. Bookmark the permalink.

This site uses Akismet to reduce spam. Learn how your comment data is processed.