This week saw the release of the 12th cartoon in my series hung loosely about, in timing terms at least, the BBC’s ‘Who Do You Think You Are?’ programmes. Grand puffery to say ‘saw the release’, I know, but in puffery my background lies, and in today’s world (there I go again) we’re all on a claim of publishing, because it’s what we’re all able to do. In recent weeks – in fact right from the start of my second series, as it were, I began to suspect I’d lost what meagre audience I had for these pieces, aware the tone had taken a turn for the darker, the bleaker, and a tautness of direction – of whatever staging these vignettes involve – had emerged quite unplanned: all of which Pseud’s Cornering is to say the cartoons were getting right grim. 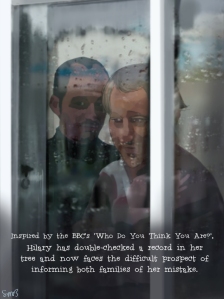 Grimness and ennui (which sounds like a restaurant concept in Shoreditch) are – in my experience – real dimensions of genealogy; not in the matter that is found, but in the act of finding.

My wife said to me, think about what reaction, what response you expect when you put these things out there. It could be difficult for anyone to engage when the ancestor hunters you portray are weird, or are shunned, or are being intrusive and creepy. It’s kind of difficult to play along. And she’s right, it’s not a jolly lot.

It’s very personal. When I say the series is loosely hung on the BBC’s business, it’s also tightly lashed about me, and my experiences over the past eight years or so. I’m not suggesting or confessing that I look through letter boxes, or ghost about cities at night – but it’s quite likely something like that. (In the making of the cartoons I’m often cast in the picture’s founding layer.) 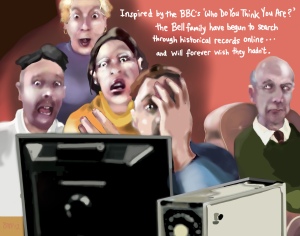 Genealogy, family treeing, whatever it’s called, is not an endlessly elegant, uplifting way of spending time. It can become obsessive, addictive, even. It’s also ghoulish – forces you to feel internally peopled (not intended as a euphemism) by sour-faced loons in sepia, who would just as likely dislike you as they would in their impossible way be proud. Look, enough patriotic and deeply-felt tears are shed for the acts and stands of ancestors, noble in spirit and balls, for the opposite truth to exist too – that you probably wouldn’t have gelled with the great-grand-bugger in, or at, any age. Which is a side comic point, but still a whiff of the stink that makes some of these cartoons deliberately unpleasant. And all of which touches on the question why do I bother with the family forensics, if so troubling, troublesome? To which I would answer – I’ll come to that another time.

Reliance, high-dependency; it’s a recurring theme: a fact of genealogy is that you depend on others for info and pics – and that’s not always a high-fiving thrill. People will not always get back to you; will not be arsed to re-scan that photo; will never make it up to their loft in the end – and the default silhouettes on your online tree will remain so for the next few years – hell, they could be so for ever.

Not everyone, not all interested parties, are as interested as you are. Again, it’s my personal experience. Everyone’s drivers are different. Time is relative and relatives take time. And botheredness takes on a type. 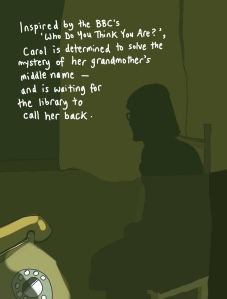 The BBC, very nicely, presents a nirvana of family truffle-hunting: librarians and archivists, suddenly with blusher, or in a nice shirt, pre-prepped, peppy and gliding on wheels (my only related experience being when an archives assistant told me ‘wait there’, and returned a minute later to suggest, as her boss had, I try a different, unspecified, approach). And of course this invested-in research and edited staging makes the joy the programme is – which is nothing but wonderful. And – and – it creates the space for my ‘take’, my types – the power of and as great as ever. Because in tandem with it all, I am frothing with awe and delight, pleasured immensely by what my own efforts have uncovered – and whom, for goodness sakes.

What I set out to do also is to dramatise a truth along the way – the search for the past can be a grim and lonely struggle that goes awkwardly against the very movement of everybody’s time.

Three in the morning in an all-night garage… when botheredness takes on its type, and my comedy, such as it is, has its time.

I come from a long line of cartoons and beer. I was once peed on by a tiger. Hoping the resultant super-powers are yet to come, cos if these are they, then, grrrr....
View all posts by Stevie Mitchell →
This entry was posted in Art, comedy, Family History and tagged Ancestry, Archives, Genealogy, Librarians, Who Do You Think You Are. Bookmark the permalink.

This site uses Akismet to reduce spam. Learn how your comment data is processed.